Polish For the sake of viewer convenience, the content is shown below in the alternative language. You may click the link to switch the active language. 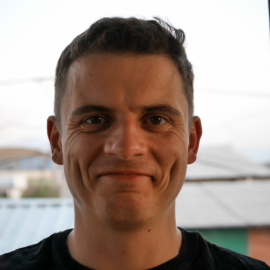 Doctor of Philosophy in Sociology and Social Anthropology

Researcher, member of the Center for Social Change and Mobility Research

In the Institute for Social Studies I investigate rebellion and reaction in the post-imperial borderlands between 1905 and 1921. Comparing Poland, Finland and other borderland regions of the Russian Empire I ask about revolutions that succeeded, failed or did not happen at all against the backdrop of nation building and state-crafting in the region.

Russian Poland was among the most militant tsarist borderlands during the 1905-1907 Revolution. Harboring long-lasting strikes and breeding bellicose street fighters, Poland witnessed an unprecedented political upheaval manifest in the emergence of mass parties, labor unions and a new public culture. However, only a decade later, when revolutionary movements again loomed large and shook the whole region, Poland remained relatively calm. Forging a new statehood rivaled the earlier popular drive toward social revolution. Despite the Bolsheviks’ march on Warsaw to spread the socialist revolution westwards, the popular mood stuck with national unity. Polish popular classes stood almost unanimously on the side of the Polish nation state, even after it failed to deliver its promise to be a socialist-leaning one. What then were the processes responsible for the withering-away of social-revolutionary tendencies?

The project is an asymmetrical comparison of the Polish rebellion, nationalist re-mobilization, and eventual integration of the subaltern classes, with other revolutionary sequences ending in distinct outcomes. The analysis of ideological landscapes will explain the occurring divergences. I will analyze sources on political languages as newspapers and pamphlets against the backdrop of sources documenting social unrest. Deftly integrating historical sociology, conceptual history and historical discourse analysis, my work addresses the entanglement of structural factors and intellectual transformations in political process in highly interdependent trans-national context. More on the project

I am a historical sociologist working on transformation of public spheres in East-Central Europe. My expertise is located in-between historical sociology, cultural history, labor history and history of concepts. I am interested in empires, revolutions, nationalism, labor, and state-crafting. Main current research concerns figurations of contentious politics and state building in the borderlands o the late Russian empire.

I hold a PhD in sociology and social anthropology, MA in sociology of culture and media, second MA in philosophy, and wide practice in historiography.

I am a skilled researcher, effective administrator, inspiring speaker and aspiring teacher.