HEAD OF THE CENTER

The goal of the program is to have each of the members conduct an annual study on a particular subject using the exact same methodology and the same instruments. ISSP questionnaires are appended as a 20-30 minute supplement to the general national social surveys done on representative national samples of adult populations (it is assumed that the realized sample will exceed 1000 respondents). ISSP members also have to provide standardized socio-demographic and occupational information on respondents. It is assumed that in each country respondents should complete the ISSP questionnaire by themselves after completing the main interview in the presence of the interviewer.

Annual ISSP topical modules are developed by international teams (usually over a few years) and tested in different countries. Final versions of the research instrument are discussed and accepted in the plenary session of ISSP. ISSP questions have to be accepted by all countries because of the assumption that questions can be translated into the languages of all members. The final version of the questionnaire is prepared in British English and it is the base for translation.

ISSP member organizations cover all development and completion costs in their respective countries. ISSP does not have a central budget. Zentralarchiv fur Empirische Sozialforschung (ZA), Universitat zu Koln and – since 1998 – Centro de Investigationes Sociologicas/ Analisis Sociologicos, Economicos y Politicos (Madrid) are merging the files from all member countries into one dataset. These two centers also distribute data-files and methodological documentation. In Poland, the Institute for Social Studies, University of Warsaw distributes ISSP materials.

By 2010, the study was a supplement program of PGSS. The following modules were realized. PGSS edition in brackets. 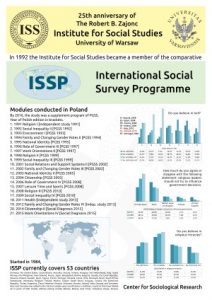 The Polish General Social Survey (PGSS) is the major ISS project, carried out by since 1992 by the Center for Sociological Research.

The PGGS data files and documentation are in public domain. Users are welcome to duplicate the data and code book, and are free to publish research based on these materials. Distribution of the data sets is handled by the Institute for Social Studies, University of Warsaw.

Due to the fact that many of the PGSS variables are comparable to those used in the GSS and ALLBUS surveys, these data provide scientists with a unique, well-tuned instrument enabling them to search for theories or to build new ones. The results of PGSS are also of interest to policy makers and to public opinion analysists.

The PGSS program closely collaborates on rules of data collection and exchange with the Inter-university Consortium for Political and Social Research (ICPSR), the Institute for Social Research, the National Opinion Research Center (University of Chicago) and Zentrum fuer Umfragen, Methoden and Analysen (Mannheim). 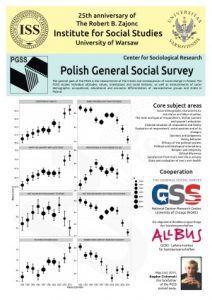 POLISH SOCIAL DATA ARCHIVE is a joint project by Institute for Social Studies of the University Of Warsaw and Institute of Philosophy and Sociology of the Polish Academy of Sciences.

Depositing and providing the access to the database allows for the openness of the research workshop, which contributes to standardization of the research procedures and enriching the knowledge on social research methodology.

Data archiving and rendering them accessible allows the spread of measurement tools construction standards, including the rates of social phenomena measurement. It allows for their inter-subjective control and provides not only ready-made patterns, but it also becomes an inspiration for new research on the basis of the already existing projects.

Collecting information on the projects that have already been completed or are being conducted, allows for gathering information and data source for the execution of one’s own analyses with the usage of the already existing data and basing on the projects that have been executed by the others. What is important, in this way one can avoid the duplication of the research, and on the other hand, the researches can be enriched.

Data archiving and rendering them to the public on redistribution basis is an outstanding auxiliary material, that can be used for educational reasons. The diversity of the researched issues, methodological concepts and the research results that any person using the data from Archive can take advantage of, is undoubtedly a valuable material serving to spread the social science both among the professionals as well as among those who just enter the world of social research.

It often happens that the researchers limit the hypothesis set to the objectives that they have posed while planning their research. Making use of already existent sets of data allows them to reach beyond the objectives that had been posed before the research started. The access to the data provided to people who have not been related to the project, opens the way to new discoveries and verification of the hypotheses different from the ones that were posed as the objective of the research at the beginning. Therefore, the researchers should take into account such a possibility of making use of the data. Simultaneously, it allows for the enrichment of the amount of information on the social issues and consequently, broadens the knowledge on social life, which is a primary and basic objective of every research. 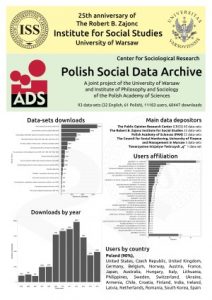